I wrote this in 2008 on an old blog, and just wanted it here so I could continue my campaign to ban the asinine “n-word”.  Shout out to my favorite current comedian Louis CK.  He has a bit on the same subject.  I wrote mine first though. 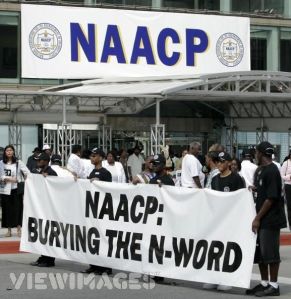 This is your official invitation to join my campaign to ban the N-word. This word, since it’s inception, has had a deleterious affect on the attempt to further dialogue on race relations. Whether on television, radio, college campuses, and spoken word poetry nights at quaint coffee shops, you hear people spew the n-word liberally. For the sake of our tenuous racial relations, and the future of our children, I propose we ban the n-word.

That’s right the N-word. Not the word nigger, the “N-word”.

This is one of the most ridiculous inventions in American language. A word is only what you mean. If you say “N-word” and you mean nigger, it’s the same thing. We need to stop treating the word nigger like it’s a magical chant similar to “hocus-pocus” or “abracadabra”. People avoid the word like every time it’s uttered a dead Klu Klux Klansmen earns his wings. I know the NAACP officially buried the word, and there are numerous lessons on life in America to be learned from this groundbreaking institution, but I’m not taking vocabulary lessons from the National Association for the Advancement of COLORED People!

Our dialogue on anything consequential in this country is crippled by our refusal to encourage people to listen and comprehend. The need to publicly and absolutely ban any word speaks more to a deficiency in our educational system than an advance in our race relations. Words like satire, nuance, innuendo, inference, and context are lost on the vast majority of our population. Those words have been replaced by “blurb”, and “sound-bite”, giving the speaker fifteen seconds to expound and the listeners two seconds to decide how to react. We have lack the ability to see hypocrisy or irony (depending on the speaker and situation) for terms and phrases like “support our troops” or “bringing democracy”. Politicians and pundits alike, intentionally latch on to any language that can possibly be misconstrued. This allows Hillary Clinton supporters to restate Barack Obama’s words about Reaganism, or his grand mother, like they honestly did not comprehend their meaning.

Nigger is a hateful word. It is spoken under the breath of intolerant classmates, yelled at belligerent protestors gathered at lunch counters, and screamed at broken brown bodies swinging from trees. The weight of the word, however, is carried in the actions that it implies or emboldens the speaker to do, not by some mystical combination of letters. Therefore the power of that word can only be cured through transforming the actions of people, not the omission of the last five letters. To think that replacing nigger with “n-word” equates to real progress gives us a false sense of accomplishment as a society. It allows us to replace “dirty nigger” with “urban”, and “uppity nigger” with “articulate” with out anyone being insightful enough to catch the racism embedded in each statement.

African Americans sit around and rationalize over the top responses to any infraction of the “white people can’t say nigger” rule. Brothers and sisters, the next time you think you over heard a non-black in a crowded room say the word nigger, ask them straight forward and honestly “What did you say?” Then pay close attention and comprehend the response. Use their response to your question, your knowledge of who that is, where you are (and your ability if necessary to escape a physical confrontation unscathed) to determine your actions. You might have heard a co-worker warning his co-worker about racial epithets other colleagues used about him, or fan fondly reminiscing about Tupac Shakur lyrics. You more than likely over heard a racist, but to decide how you are going to respond to a trigger word before analyzing the circumstances is unhealthy no matter what the word is, be it “love”, “hate”, “ice cream” etc.

The “n-word” makes well meaning non-blacks tip-toe around very basic statements. Can you honestly call Tom Brokaw a racist if he says on air, “The fight in Jena Louisiana was caused after a white student called a group of black students a nigger”? Are we really that uneducated and unsophisticated to not understand context and intent. The word is supposed to make your toes curl and your hair stand on end. It is meant to transport you to that place of intolerance and hatred we loath to visit. It should be our goals to be skillful enough speakers to use the word when that is the response we are trying to engender from our audience.

From now on you must either say the word nigger, or “the word I am not permitted to say due to eminent violent pavlovian response from people of color or the social ostrisization from European Americans despite any way I might have intended to have said word” or (wipsdevprpcsoeadawimhisw for short).

As for the use of the term nigga (with an a), who can dare tell someone what is an acceptable term of endearment? I would never call Jesse Jackson my nigga, because he’s not, but my friend Everett is my nigga for life. They should change that aspect of the ban to the “I am not your nigga” campaign. Blacks from all over the country could sign a petition and have their picture taken and put on a website stating plainly and clearly that he or she is not your nigga. In all honesty, that’s not really necessary, most people know who their niggas are. I would never, and most blacks for that matter, call someone a nigga without some indication that the word would be taken indifferently or as a compliment.

Now, something can be said for the idea that the frequent use of the word belies a deeper meaning for how we, as black people, value each other. Even if that’s the case, you don’t rid your home of a fire by getting rid of the smoke. A dormant hate or contempt for your own can only be cured through constant affirmations of our shared history and future, combined with a recognition of the beauty we have as a people. If this is done, slowly and deliberately, not in token grand measures like marches or speeches, the words we use that tear us down will die a natural death.

After successfully riding the planet of the n-word, I will go on to ban more words that are an insult to intelligence like “gosh darn”, “shucks”, “frickin’” and others to be added accordingly.

2 thoughts on “Join My Campaign to Ban the “N-Word””