Last spring my twin sons were learning how to identify coins in their kindergarten class.  I was excited to help them, so I pulled out a bunch of change from my pocket and started explaining who all the Presidents were on the coins.  “Most of them were slave owners,” I said.  “That means they were white?” my son Dela said.  “Yes”, I replied.  Then Olu (with an honestly confused look on his face) asked, “They let white people be President?”

This is the world we live in now.  A completely topsy-turvy world from the one I was born into.  A world where there are children who do not know life before a black President.  In this new world, our sitting president got his ass handed to him in a debate.  Not in factual 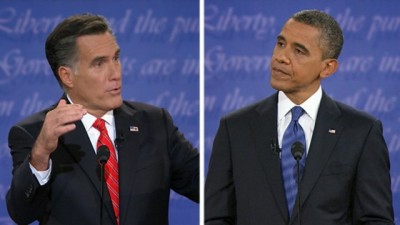 statements, as his defenders accurately screamed louder on Thursday than anything Obama said on Wednesday night, but in debating skills and just straight up attitude.  (For the record, the art of debating has nothing to do with truth or righteousness, its about your ability to be convincing in stating your point.  That’s why in debate class they always randomly assign each team their side to defend randomly.  The winner is the one who shows the most skill, not who represents the “correct” side.)  People have been trying to figure out why.  Was he to busy being President to prepare the way Romney could?  Was it his 20th wedding anniversary distracting him?  Was it (in King of horrible excuses Al Gore’s words) the mile-high air of Denver that threw him off?  No.  It was because Obama and his team still think, incorrectly, that America is not ready for an aggressively litigating black man as President.

I’ve chronicled my feelings about Barack Obama in blogs and songs over the last four years.  In 2007 I wrote a blog that was picked up by The Washington Post opinion section (and even quoted by Good Morning America and by Gwen Ifill in her book The Breakthrough) called “Okay Barack, Now Show’em Your White Side”.  In it I humorously yet honestly implored him to tone down his blackness, and to play up his white ancestry, because America wasn’t ready for a blackity-black black man as President.  Today, in lieu of the social and political changes we’ve experienced, I’m doing the exact opposite.  Not because of politics, but because debates are a spectator sport, and Barack Obama’s biggest contribution to my life is his ability to be a living example of what we are capable of as black men.  He is the prototype for the younger black men that I’ve fathered and/or teach.  For some reason the Obama brain trust is so worried about a Foxnews demographic (that will never vote for him) that they’ve given us insanely weak moments like Shirley Sherrod’s firing and the God and Israel Democratic Platform addendum.

Before the debate, I heard pundit after pundit say they are concerned with Obama being too smug, or recalling how he successfully toned it down a notch to debate Hillary Clinton. They made sure that the public didn’t have the optics of a young black man picking on or demeaning a middle age white woman.  That is still what Obama is afraid of, and he has absolutely no reason to.  Being polite and conciliatory is okay for a press conference or a one on one TV interview.  But this was a debate.  If he wasn’t ready to aggressively defend his positions he should have stayed home.  The truth is, he believes or has been told that his soft-spoken-ness is what the undecideds want.  He’s still thinking like he’s debating Hillary Clinton, and doesn’t want to offend white people and women.  Yes, women hate when a man speaks aggressively to them, but they hate it even more when a man does not defend himself in a masculine way against another man!  There is plenty of evidence, in politics and popular culture, that enough of America is ready to see a black man aggressively and intelligently defend himself in a debate.  I’ll give you my best four examples. 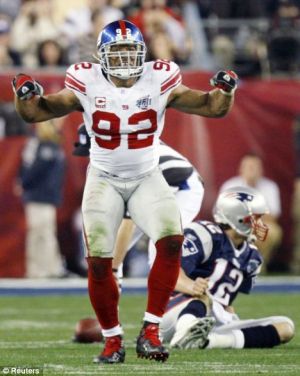 Some of you are going to laugh, but I am so very serious with this one.  Michael Strahan is a 6’5”, 275 lb muscular blackman, most known as the NFL’s all time leader in quarterback sacks.  To state it a different way; no man in the history of the United States has thrown more defenseless white men to the ground with malicious force and anger than Michael Strahan.  But yet somehow, the ABC network producers and executive at the now Kelly & Michael Show, think that Strahan is the perfect fit as co-host of their morning show.  That’s right. While Midwestern soccer mom’s get their kids ready for school, then go about their morning chores in their best June Cleaver impersonations, they let a huge black man professionally trained in the art of handing out concussions, sit next to the diminutive bundle of bubbly white purity Kelly Ripa as they discuss the previous days cute and cuddly news stories.  If Michael ever got mad enough at Kelly on set, he could kill her with a left jab.  But 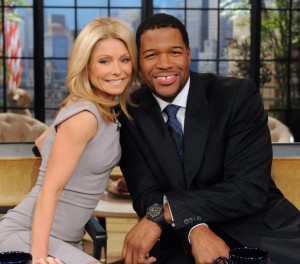 absolutely no one is afraid of that happening.  Not in reality, and they’re not even worried about the thought formulating in the most latent racist’s imagination.  They think that enough of America, after centuries, has gotten over its fear of the angry black man.  They are betting millions of dollars on it.  TV executives, for the most part, don’t make ground breaking cultural statement.  They follow trends.  They think America is ready for this.

Exhibit B: Samuel L. Jackson and Will Smith

Once again, I’m dead serious.  You don’t get more “demonstrative black man” than good ol’ Samuel L, and he has white America lining up in droves to watch his furious splendor in every movie.  I’m not saying that Obama should be Jules from Pulp Fiction, or Neville Flynn from Snakes on a Plane, but America let Samuel L. Jackson chain a nubile white woman to his radiator in Black Snake Moan, and no one threatened to lynch him.  Ask any Samuel L. Jackson fan their least favorite role and you’ll see it’s when he most resembled Barack Obama.  A reasoned, calm and calculating Mace Windu in the Star Wars prequels (not counting the fight scenes, just the acting).  I’m not saying Obama has to be Nick Fury from the Avengers, but when Romney is spewing lies about the 47%, he can at least defend them like family the way Carl Lee Haley did in the court room in A Time to Kill.  White people loved that movie.  And it was racial!

You can say the same thing with Will Smith.  No. It would not be “Presidential” for Mr. Obama to be a rhyming, face bashing, slick talker like Muhammad Ali, or a wise cracking fighter pilot like Captain Hiller from Independence Day, but if he gives us one more 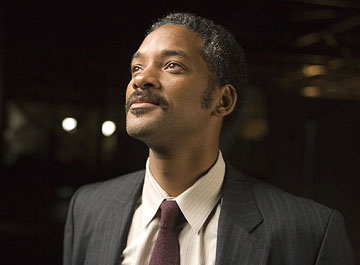 Bagger Vance performance like he did at the first Presidential debate, I’m revoking his hood pass.  America loved seeing Will get smart-alecky as Captain James West in Wild Wild West, and as Agent J in Men In Black.  I’m not asking him to be either of them.  Just be the determined go-getter, willing to scream, fight and claw for his family the way Chris Gardner was in The Pursuit of Happyness (that is the spelling of “happiness” from the movie).  America would love him for it.  Hollywood has been prepping America for that moment; it’s time for Obama to step into it. 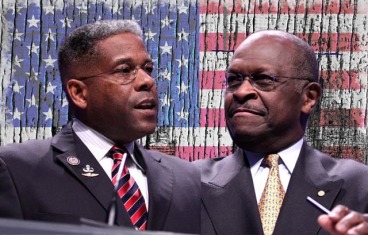 Where do I begin?  The Bible Belt loves these men.  They claim to be “speaking the truth and shaming the devil” with their words and their attitudes every time they touch the microphone.  Herman Cain actually took himself seriously as a presidential candidate for a few weeks, and with good reason.  There was something about the bluntness in his typical southern black tone of voice and cadence that really struck a positive chord with the lily white Republican Party.  Much of the same can be said for Allen West.  If the Human Genome Project spliced the cowboy-shoot-from-the-hip arrogant strands in the DNA of George Bush, Dick Cheney and Donald Rumsfeld, then put them in the tanning bed set on high for 45 minutes, you’d have Allen West.  Republicans love handing him the microphone, specifically for his demonstrative nature.  Yes, of course, if Obama spoke like either of him, they’d feign outrage and say people shouldn’t have that kind of demeanor in politics, but that’s just another example of their hypocrisy that would be easy to point out.  There’s a huge section of the electorate who want someone who can speak aggressively.  Missing that aggressiveness was a large part of why they dumped Michael Steele and burned his phone number like a buck toothed, bow-legged rebound they dated just to get over John McCain.

Follow me on this one.  For almost five years, Foxnews and the far right wing has been trying to dredge up Jeremiah Wright clips and foment enough anger to foil Barack Obama’s political aspirations.  After 2008’s win, and the flailing miss at bringing Rev. Wright up again this past week, we know that statistically 51% of America either does not care about Rev. Wright, or they understand that there are moments in time, and issues on which, a black man can get righteously loud and angry.  They understood that Wright was talking about the treatment of black people in America, and even if they don’t agree with the words he used (or even his reasoning), they understood his emotion and/or don’t put any ill will on all black men because of one black man’s anger.

Look, Barack Obama does not have a single loud and aggressive bone in his body the way Strahan, Jackson, Smith, Cain or West do.  I don’t expect it, and I wouldn’t tell him to be that far out of character.  But the next time (and there will be a next time) Mitt Romney tells 60 million viewers that he’s going to treat the current Commander-In-Chief like one of his pubescent sons telling a lie, I need Barack to do something more than smirk and look down.  America is ready for him, a black man, to aggressively stand up for himself and his constituents.  I need to see that happen.  So do Olu & Dela.

3 thoughts on “Okay Barack: Show’em Your Black Side”